Don’t you think Santa, himself, is a gift — of our imagination, our North Pole, where weird and magical gifts take shape, all those little elves hammering away? Once received, our favorite gifts come alive and increase in value and meaning as we pass them among us. If you’re wracking your brain to find a gift for your father, mother, brother, sister, friend, or the kind soul who cuts your hair, maybe I can help.

I’m calling in a pierogi order

Here are two gifts I received from readers this year:

“Liz bought a copy of your book for her father, himself a rust belt boy. Dad is now mostly confined to a wheelchair and seemingly content (discontent?) to complete his life as a grumpy old man. He rarely engages in conversation and when he does it is mostly to complain that the doctors don’t know what they are doing and neither do the health aides, for that matter. He did, though, read your book and, as Liz relayed, your stories uncorked so many of his own. He and Liz talked for hours about his childhood in eastern Ohio, the first rich conversation they had had in many years.  Apparently, he shared memories and details about his early life that Liz had never known.” 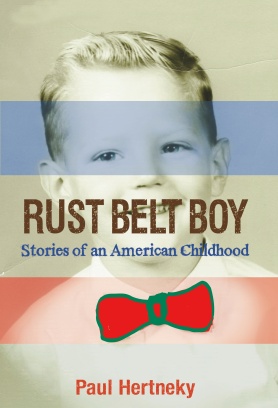 “Your book should be required reading for every new Pittsburgh resident. I lived in Pittsburgh for 18 months… but never really understood the difference between what I experienced and what my neighbors did until I read your account.”

Touching stories like these have been coming in since May, and I feel compelled to pass them along. Those stories, and the lessons I’ve learned from them, make every minute I’ve spent writing and hawking the book worthwhile.

For instance, I’ve learned that thousands of American towns, perhaps most of them, had been mill towns, or still are. They share common traits — rivers running through, ethnic neighborhoods and churches, social clubs, and more.

Readers say they love giving the book as a gift, and ’tis the season. You can order direct from Bauhan Publishing (where you can request a signed copy) or from Amazon. You can also buy the audiobook from Audible.

Here’s wishing you a fun and festive holiday. Cheers!